Another chilly day and a Sticky Ginger Cake 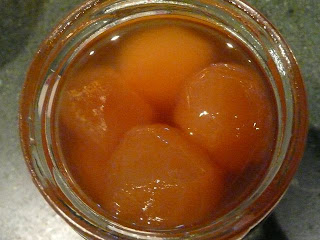 I was feeling quite good about the weather...we have had so few cold days and the garden has been a pleasure even through December and January because the sun has shone and we finally had a chance to get on top of all of those November jobs that never happened!!

And then I sat and picked up Hugh Fearnley-Whittingstall's 'The River Cottage Year' with a coffee at some point in my day and started to read my way through the first few months of the year...January was quite up, buoyant and somewhat positive given that most people in the northern hemisphere find it the toughest month of the year...maybe it has something to do with the fact that his birthday is smack bang in the middle of the month when most people are hitting a real low with Christmas all over and the credit card bills coming in....

So enlightened he talked about eating seasonally...kale, cabbage, endive, carrots, game birds and the like...then as you head on into Feb it all starts to go downhill...he calls it 'the coldest and most depressing and soul destroying month of the year' and March does not fear much better except that March has the added addition of 'HOPE'....as the days get a little warmer and a little longer one can see the light at the end of the long winter tunnel...summer lays ahead with all of the glorious fresh, sunshine dependent foods that this promises...cherries, raspberries, strawberries and sun ripened tomatoes, aubergines and fresh basil!

So I, in my usual optimistic way, take these warmer temperatures to mean that all of this is a lot closer than usual but Hugh's harsh reality check has made me realise we have still got a few 'months' to go!!!
You can read more about Hugh and his mates at  The River Cottage on this link.

In order to not take this to much to heart and inspired by finding Geoff's gift of a jar of sweet ginger in my cupboard I decided to make a Sticky Really Gingery Ginger Cake...a firm family favourite that keeps in the tin forever and is just fab with a cuppa on a chilly January afternoon.... 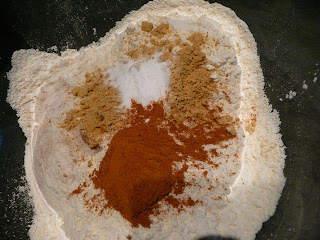 1. Put 250 gm of flour, 1 tsp of baking powder, 2 tsp of ground ginger, 1/2 tsp ground cinnamon, 1 tsp of bicarbonate of soda and a pinch of fine salt into a large bowl and mix to combine. 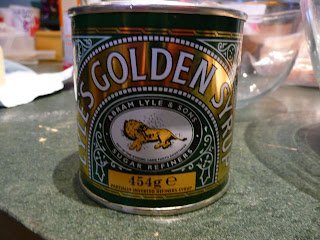 2. Put golden syrup, syrup from the jar and butter into a saucepan and melt gently... 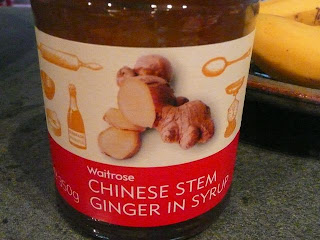 3. Add sugar, chopped ginger and sultanas to the warmed syrups and butter once it is melted. 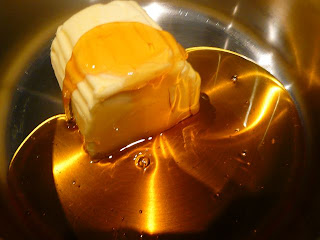 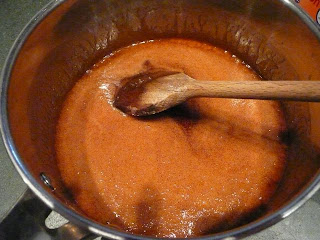 4. Beat eggs and milk together in another bowl. 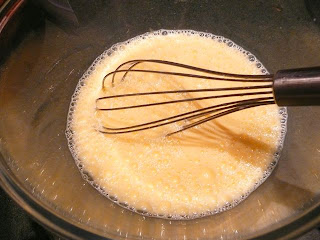 5. Add the warmed butter and golden syrup mixture to the flour and mix till combined. Add egg mixture and stir till there are no traces of flour. 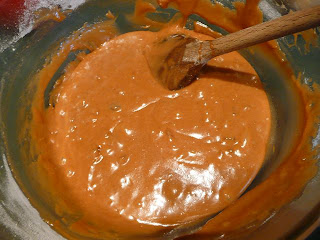 5 Pour mixture into tin and cook for 35 - 40 mins...smell the ginger and enjoy the warm cake out of the oven to brighten up your day! The rest you should wrap in foil and put in a tin to enjoy over the next few days. This keeps exceptionally well. 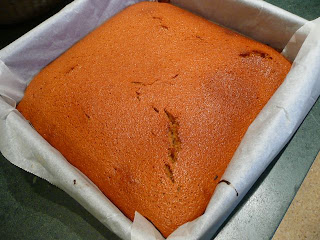 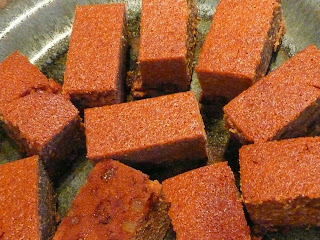 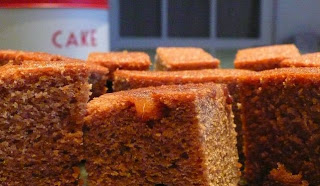 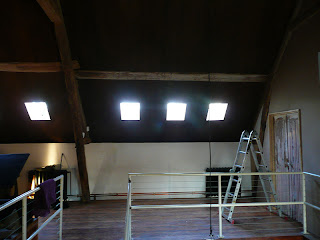 To reassure my family and friends that my husband is not ill treating me and my family by torturing us with freezing cold breezes I attach the finished windows...yeah to neigh in 5 days!! Great progress!
And now we are all seeing a little more of each other! 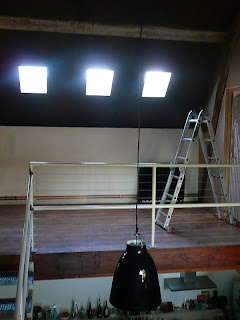 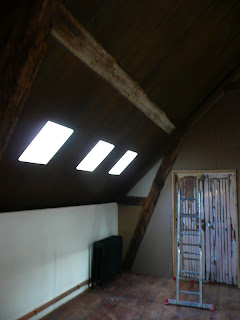 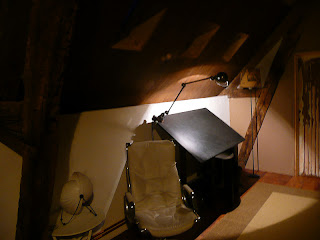 On a completely different note we had a simple supper last night that I would highly recommend...bored batless with salmon steaks cooked in the usual manner I came up with this and it was great! Photos do not do it justice but we were hungry! 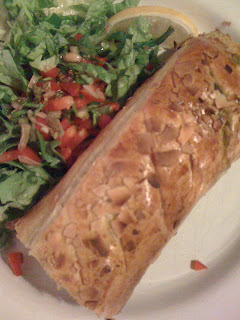 Salmon en Croute for 2...
2 skinless salmon steaks
ready rolled or homemade flaky pastry [one large square should do it]
2 or 3 tablespoons of pesto
3 or 4 cherry tomatoes
a lemon

Preheat the oven to 200 deg

1. Roll the pastry out into 2 rectangles 2.5 times as wide as the salmon steaks and 4 cm longer.
2. Spread pesto onto the pastry leaving a 3 or 4 cm strip around the edge of the pastry.
3. Place the salmon steak in the centre of the pastry.
4. Slice the tomatoes and place them on top of the salmon slightly overlapping them. Season with a little salt and freshly ground pepper and sprinkle with fresh herbs if you fancy.
5. Cut the lemon into 6 wedges lengthwise and squeeze one of the wedges over each salmon steak.
6. Using a pastry brush brush the edges of the pastry with water and then wrap the pastry around the salmon and make it look pretty tucking in the ends and making sure the tops are overlapped firmly.
7. Place the wrapped fish onto a piece of baking paper on a flat tray.
8. Using a large knife make diagonal slashes every 3 or 4 cm vertically along the length of the fish.
9. Brush with egg or milk and sprinkle with sesame or poppy seeds.
10. Bake in the oven for 15 - 20 mins until pastry is a toasty brown and puffy!
11. While you are waiting make a simple side salad to serve...rocket, avocado and red pepper worked well!
11. Transfer your salmon parcels to your plate and serve whole or cut it into thick slices and serve slightly overlapped...with a wedge of lemon to the side...and tuck in and enjoy! 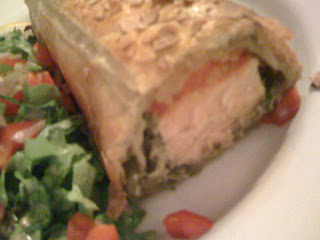 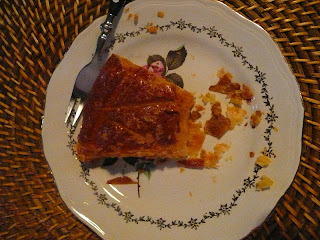 One of our favourite French food traditions that we all look forward to eagerly is the arrival in January [and ONLY January] of the 'Galette des Rois'. A tradition dating back centuries the 'galette des Rois' is shared with family and friends in a special dinner to celebrate Epithany. 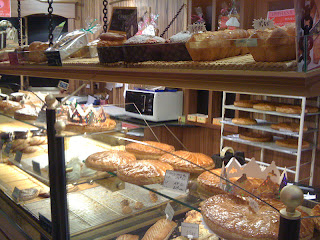 The 'Galette des Rois' is a flat cake made of puff pastry and filled with frangipane [made with ground almonds, butter, eggs and sugar] and it is delicious served warm...in fact the boulangeries provide a special brown paper bag that the galette is heated in which is especially designed to stop it drying out. 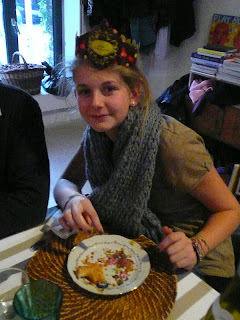 Hidden in the folds of frangipane is one special ceramic trinket or 'le feve' and the person that is lucky enough to find this in their piece is the 'King for the Day' and gets to wear the crown that is provided with each and every galette purchased. Carla was the winner at our table yesterday when our friends came for dinner to celebrate with us! After a huge Sunday Lunch of salmon fishcakes and roast lamb with broad bean mash that Michael prepared we followed the cheese and salad course with the galette! 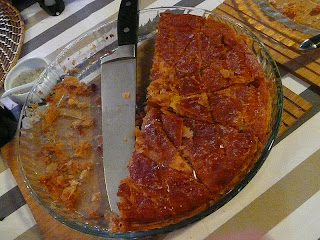 As tradition demands the youngest child...Liliana...sit under the table and call out the name of everyone in the party in a random order to decide who gets which piece of galette. This is to guarantee that everyone has a fair shot at getting the piece containing 'le feve'. The 'feve' was a ceramic cap...the same as those found on the top of a champagne bottle...these wee trinkets are collectable and vary in degrees of finesse mainly depending upon the price paid!! The trinket from a supermarket galette will often be a gawdy symbol of a current movie whereas the fancy boulangerie will have a very stylish 'feve' that is often very beautiful and collectable...this is mainly a Northern French tradition and is very popular in Champagne. 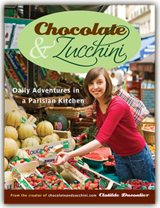 If you are not able to get a galette from your local bakery then here is a link to a recipe with excellent instructions and a bit more history from one of my favourite food blogs and cookbook 'Chocolate and Zucchini' by Clotilde Dusoulier.

Further Information for those interested!
" Tradition holds that the cake is “to draw the kings” to the Epiphany. A figurine, la fève, which can represent anything from a car to a cartoon character, is hidden in the cake and the person who finds the trinket in their slice becomes king for the day and will have to offer the next cake. Originally, la fève was literally a broad bean (fève), but it was replaced in 1870 by a variety of figurines out of porcelain or—more recently—plastic. These figurines have become popular collectibles and can often be bought separately. Individual bakeries may offer a specialized line of fèves depicting diverse themes from great works of art to classic movie stars and popular cartoon characters. The cakes are usually sold in special bags, some of which can be used to heat the cake in a microwave without ruining the crispness of the cake. A paper crown is included with the cake to crown the "king" who finds the fève in their piece of cake. To ensure a random distribution of the cake shares, it is traditional for the youngest person to place themselves under the table and name the recipient of the share which is indicated by the person in charge of the service." as quoted from Wikipedia 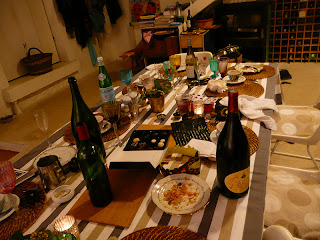 It was a fun lunch that lasted till our guests departed around 7.30pm! A typical French style lunch that lasts all day and into the night...no need for an evening meal... 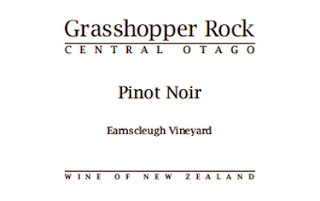 On the wine front we started with a magnum of Olivier and Annemarie's own champagne 'L.Huot Fils'  we then, forever the Ambassador's for our home country, served some NZ wines for our French guests to sample...the classic Malborough Cloudy Bay Savignon Blanc went down a treat and there was an extended rave for the Central Otago Pinot Noir 'Grasshopper Rock'....a rare wine internationally but it is available direct from the vineyard or from 'Naked Wines' in the U.K....
Posted by Glenis at 04:41 No comments: