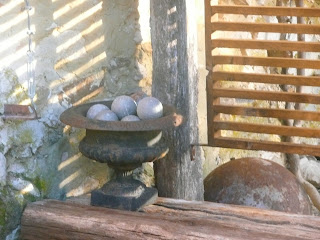 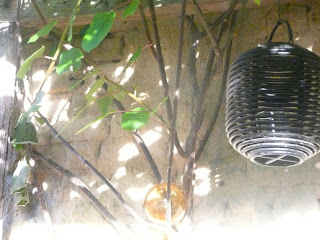 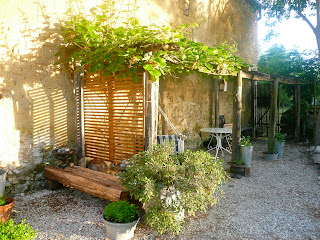 On Sunday morning I was awoken at 5 am by claps of thunder shaking the house, lightening flashes and a downpour of much needed rain...remembering the laundry on the line I sleepily went outside to rescue it only to discover it was already soaking wet...as was I by the time I crawled back into bed...along with a wet cat that had sneakily snuck in with me and who was optimistically trying to make herself cosy on our duvet! BUT two hours later the sun shone and our twelve guests slept on as we set the table under the trees after recovering from another night under the stars...by the fire... 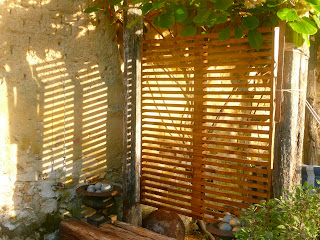 We had a great weekend with a full house each night and two large dinners to cook and prepare so come Sunday morning we were looking forward to a relaxing afternoon with the girls strolling the brocante in the neighbouring village Soixy Aux Bois...but first it was time for breakfast under the trees...Mike made his glamorous scrambled eggs, croissants and coffee and everyone left contented... 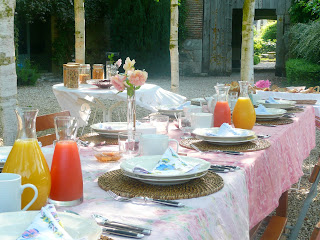 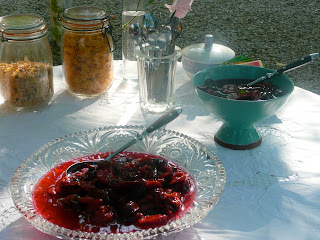 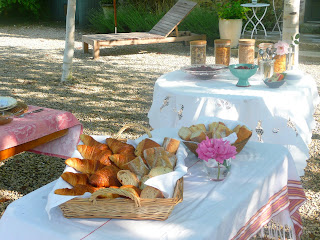 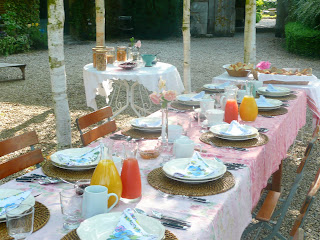 Our lovely Parisian guests lingered and chatted as their son played comfortably with Liliana and Madeleine...familiar after spending the weekend hanging out together in the garden...the other two French couples parted separately only to return 10 mins later after realising that each had assumed that the other had their 12 year old son but alas he was also still playing in the garden! Good humour and many compliments all round and the house fell quiet once more...

Mike's marinated leg of NZ lamb went down well once again but we served it with a slightly different sauce which proved to be the star of the show...so much so that the Parisians sat in their fancy 2 Michelin Starred restaurant in Epernay the night after dining on the lamb chatting about how fabulous it was...comparing it to their lamb medallions they had been served with much grace!

Mike's Butterflied Leg of Lamb with Anchovy and Mint sauce

Butterfly a leg of lamb and then make a marinade using the ingredients below....crush, chop finely and blend together in any way you prefer so the flavours can mix and create a potent thick paste...

6 cloves of garlic crushed in a mortar and pestle with a tsp of Rock salt and a few freshly ground turns of the pepper mill...chop a few branches of young rosemary and oregano finely and...blend together with 1/4 cup olive oil and 1/2 a cup red wine...spread over the lamb and leave for 7-8 hrs [or overnight] to marinate...

Cook with half a dozen whole peeled shallots in a roasting pan for 1 hour at 180 deg or until still slightly pink...or however you prefer...this can be done on the BBQ then finished in the oven...baste the meat with the remaining marinade halfway through cooking time...

Serve with Anchovy and Mint sauce

a generous handful of mint leaves
4 or 5 cloves of roughly chopped garlic
4 anchovy fillets
4 tbsp olive oil
3 or 4 tbsp red wine vinegar
2 tsp of sugar
salt and pepper to season...taste and add to your palates preference...

Blend all the ingredients with a handheld blender and when the lamb is ready to serve...slice and place on a large platter using the cooked shallots, halved roasted tomatoes and steamed green beans to make the platter beautiful! Serve with new potatoes....and this fabulous onion dish!!

1. Boil the onions in water for 25 mins
2. Halve onions and place in a serving dish
3. Mix the thyme, salt and pepper and the cream together and pour over the onions
4. Sprinkle the cheese over the dish and a few more thyme leaves.
5. Bake for around 20 mins at 170 deg...till bubbling and slightly browned....
Posted by Glenis at 02:22

OOOH! That sounds yummy! By the way.. love the yellow sandals. You are practising the art of being a dangerous (old) woman!