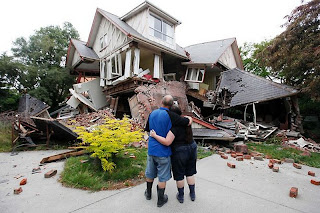 This blog has been inspired by an email I received from my very good friend Emily that I felt I must share. I met Emily in Wellington when she was a Floor Manager for TVNZ and have known her for 20 odd years. I have walked the Heaphy Track with her, been to her wedding to Rex in Christchurch and shared numerous meals with her and drunk her lovely Wairarapa wine...her Dad was a highly respected lawyer in Christchurch and her family have lived in Christchurch for over 150 years...this piece is written by her sister Lucy and is for all of us who cannot even begin to imagine what daily life in Christchurch has become.

Very touching and moving. Our thoughts and prayers are with the Cantabrians but I'm aware that we are able to forget sometimes, able to carry on with our lives, whereas theirs will never be the same. They don't get a break. It's heartening to hear about the ways people are pulling together and helping each other as they are able, and it makes me proud to be a Kiwi. Erica

A very moving post. I had tears in my eyes and all this makes me very proud and grateful to be a kiwi and live in this land. Thanks for sharing,